Calisthenics may have been here for a while, but this accessible workout offers a ton of benefits, even for those who don’t frequently go to the gyms. 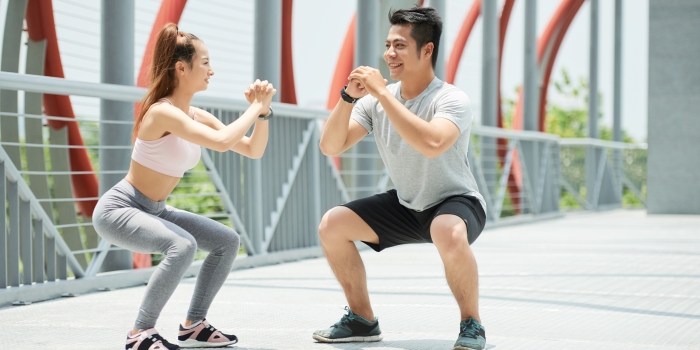 For some of us, when we hear the word calisthenics, we may think of an old-fashioned type of workout that we have been doing in physical education classes when we were younger. Images of brightly-colored leg warmers and people doing warmup routines may also come to mind for some. For others, they may not be familiar with the term, but nevertheless, calisthenics exercises remain relevant to this day.

Calisthenics is a form of strength training that consists of a wide range of movements such as standing, running, grasping, and pushing. These exercises target large muscle groups, and usually don’t rely on anything but a person’s own body weight. They help increase strength, coordination, endurance, and flexibility through pushing, pulling, bending, swinging, or jumping — all the while using one's body weight for resistance.

Aside from improving your psychomotor skills (e.g., balance, agility, coordination, among others), it provides muscular and aerobic conditioning — helping you develop strong muscles, heart, and lungs.

The Story Behind Calisthenics

They say the practice of Calisthenics was used in Ancient Greece and it was based on how ancient Greek warriors trained, including the armies of Alexander the Great. In fact, the word calisthenics comes from the ancient Greek words kállos which means beautiful, and sthenos means strength.

In modern times, calisthenics traces its roots to gymnastics with disciples of Friedrich Ludwig Jahn bringing their version of this exercise to the United States, while Catharine Esther Beecher pioneered calisthenics in a physical education course. It also became popular in the late 1950s through the Royal Canadian Air Force’s calisthenics program.

Back to Basics with Calisthenics

Calisthenics may have been here for a while, but according to the Los Angeles Times, these basic training tools are back in the limelight. Without a doubt, calisthenics is the foundation of most boot camp workouts and other trendy fitness classes.

Nowadays, even athletes, military personnel, and law enforcement officers practice calisthenics for warming up before strenuous sports or simply to help build up their bodies. Nonetheless, because it only requires your body weight, calisthenics is an accessible workout, even for those who don’t frequently go to the gyms.

Here are some of the most common calisthenics exercises. Keep in mind that if you're just starting out, you can also look for modifications for these workouts.

For a basic push-up, start face down with your body flat on the floor. Keep the palms against the floor under your shoulders, with your toes curled upwards against the floor. Push straight up to fully extend your arms and lift your body, which should maintain a straight line from your head to your heel. Remember to keep a tight core and your back straight.

Lying on your back with your legs bent, bend at the waist, moving your head and torso towards your legs. Lower yourself back to where you started. Like the push-ups, you have to keep your core tight, because you’re relying on your core muscles to pull you up. Experts recommend breathing out as you sit up and inhaling as you lie down.

With your feet parallel on the ground, lower yourself into a squat. Keep the chest upright and your face forward.  Try to get into as deep a squat as possible, then launch yourself into a jump. To avoid injury to your knee joints, make sure you’re not extending your knees over your toes when you squat.

To do the plank, hold the extended position of a push-up for a period of time. Keep the core tight and try to hold the body still for at least 30 seconds. As you gain more core and arm strength, slowly increase the duration to 60 seconds or more.

There are more calisthenics exercises that you can explore such as pullups, chin-ups, burpees, leg raises, and shuttle runs. In some places, there are even outdoor fitness training areas designed for calisthenics training. You may have seen these pull-up bars, parallel bars, monkey bars, and box jumps at these sites.

Ultimately, this just goes to show the world of possibilities that calisthenics offer in making our workouts both fun and effective, especially in these changing times.