Get your weekly cardio in with Ultimate Frisbee

Learn more about Ultimate, the sport to suit your cardio needs. 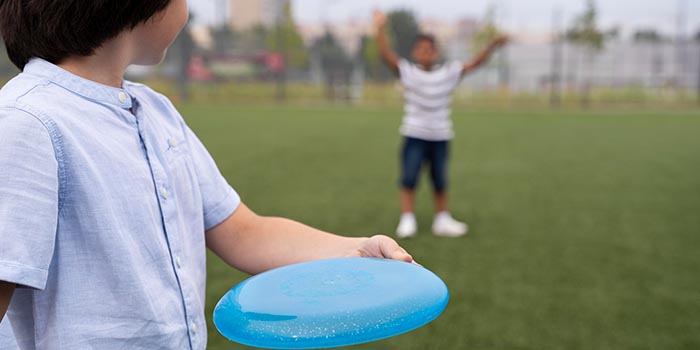 When you think of “frisbee” you’d usually think of a plastic disc you’d throw to your dog, right? That’s understandable, as the non-contact sport “Ultimate Frisbee” or "Ultimate" hasn’t gained much traction outside of America. But you’d be missing out on loads of fun and a great way to get cardio in if you dismiss the sport outright.

Ultimate is typically played in a 7v7 setup that is either gendered or mixed (with the same ratio of male and female for both teams). It is a non-contact sport, wherein fouls can be called if excessive force or contact is used when defending, blocking, or "bidding" (diving for the disc).

Ultimate is a sport very similar to American football and rugby in which the goal of each team is to get the disc to their endzone.

When a player takes possession of the disc, they may only pivot one foot to change their body position for throwing, typically with a defender guarding them. The other players are able to run around as they see fit to create openings for the thrower to pass the disc.

The thrower needs to let go of the disc within 10 seconds of taking possession or else possession is changed in what is called a turnover. A turnover also occurs if a defender is able to catch or block the attacking team’s disc. Here, the previous attackers now become defenders vying to stop the disc from reaching their endzone, and vice-versa.

Once a member of the attacking team takes possession of the disc within the defender’s endzone, a point is awarded and another round begins. It starts off once more with a pull.

There are two bread-and-butter throws that all Ultimate players must know: the forehand and the backhand. Other, harder and more fancy throws are very seldom used. The main form of skill expression in the sport (besides raw athleticism) is knowing when and where to throw the disc in relation to the position of your teammates. The strategies in the game can become very complex.

The Spirit of the Game

Ultimate, unlike other sports, is a self-officiated game. It relies on what players call the “Spirit of the Game,” which is a sort of unspoken agreement between players to play fair and follow the rules. The Spirit is a beautiful representation of sportsmanship and integrity embedded within the rules of the game itself. Should someone contest a foul or turnover, the players involved typically talk it out to come to a resolution. This usually results in the disc going back to the position before the foul or turnover was made, essentially rewinding the clock.

Where can you play?

While the game is not as popular as basketball, there are still a good number of players that play “pickups” at parks or fields. There is bound to be a community near you that plays on a regular basis, especially near universities, where the popularity of the sport is greater.

Ultimate is a very cardio and endurance-centered sport, where the majority of the time you will be running and sometimes sprinting to catch the disc. As such, regular participation in local pickup games can be a surefire way to burn some calories and improve cardiovascular health.

Aside from running, the skill of throwing the disc makes use of upper body and hand muscles extensively. Throwing the disc a great distance, especially in a pull, makes use of back and abdominal muscles to generate force. Other shorter throws use intricate hand and large arm movements to accurately make a throw.

Ultimate Frisbee (or just Ultimate) is a fast-growing 7v7 non-contact sport with the goal of getting a disc to an opponent’s endzone, much like in American Football or Rugby. Its heavy cardio focus can make weekly pickup games a huge boost to cardiovascular health. If it sounds interesting, look for local groups that play in public parks or fields and give it a try!