Can Fried Food be Fine for the Heart?

Experts have found that fried food, when cooked in certain oils, may not be as bad for our health as we previously thought. 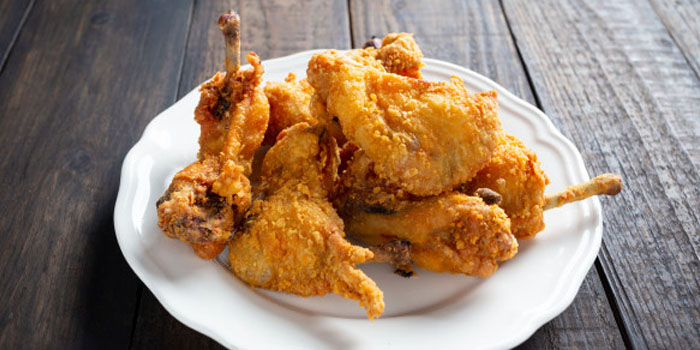 Fried foods should not automatically mean unhealthy. While they are often thought of as some of the unhealthiest foods you can eat, especially when what we have in mind are buckets of fast-food fried chicken, that statement is also not far from the truth. However, fried foods are not actually all that bad for you – if you’re doing it right. That large pot of frying oil can still have a place in a healthy kitchen.

Frying as an Essential Cooking Method

Besides being one of the four basic elements of good cooking, fat is also one of the four elemental building blocks of all foods, alongside carbohydrates, protein and, water. While it is generally believed that fat is universally unhealthy, it is an element essential to human survival. Fat serves as a crucial emergency energy source, a way to store energy for future use. It also plays a role in nutrient absorption and essential metabolic functions, such as brain growth.

Of course, too much of anything can be bad for your health, and fat is no exception. But there is no reason to demonize fried food just because it contains more fat than steamed vegetables.

In a study published in the British Medical Journal that looked at the cooking methods of over 40,000 Spanish adults over an 11-year period, not a single one of them had heart disease at the start of the study over time no link was found between the fried food they consumed and the risk of heart disease or death.

It must be noted though that in Spain, liquid olive and sunflower oils are the most used fats for frying. Some people think you cannot fry with olive oil, but olive oil stands up well to frying because the smoke point of 210 C is well above 180 C, the ideal temperature for frying food.

Typically, in most parts of the world, refined vegetable oils are used for frying, but there’s no reason why you can’t use olive oil. Although olive oil and extra virgin olive oil may fetch a hefty price tag, the cheaper pomace olive oil (oil derived from the second press of the olive fruit) is a promising substitute. Peanut oil is an effective, and delicious, frying medium, and is also more nutrient-rich than canola.

One of the best ways to avoid ending up with greasy fried foods is to drain it properly. A newspaper may look cute, but it’s not an effective way to blot off any excess oil. And if it’s been used, imagine the dirt that you’re exposing your food to. Neither is a cooling rack any better at draining excess oil. It’s best to opt for a double- or triple-thick stack of paper towels. As soon as you pull your foot out of the frying oil, immediately transfer them to that stack of towels. While it’s still hot, make sure to season the outside of your food and serve right away.

A fried doughnut is always going to be less healthy than properly fried eggplant. And French fries contain much fewer nutrients than tempura-fried shrimp. But if you love fried food, and want to keep your heart health in mind at the same time, consider choosing fried vegetables over fried dessert and keep fast-food fried chicken dinners to a minimum.